- February 21, 2018
For a book about a woman who's purportedly an excellent shot, Gunslinger Girl misses more often than it hits.

In a future America that's equal parts Westworld, Borderlands and Red Dead Redemption, Serendipity Jones is a girl with few things, including a pair of asshole brothers, a controlling (and likely childbeating) father, her late mother's twin six-shooters and a lyrical name that can be, unfortunately, shortened to Pity. After suffering one familial humiliation session too many, Pity and her friend Finn decide to leave their two-bit town and head for Columbia, beacon of civilisation and city of adventure. En route, Pity gets waylaid and redirected to the much seedier settlement of Cessation, where she unwillingly falls in with a troupe of performers from the Theatre Vespertine, famed in Cessation as a premier source of entertainment. Except sometimes, the Theatre performs a Finale, and that's where Pity starts to have problems.

A sci-fi western set in a near-future dystopia should be a home run in the wake of Firefly's enduring success; so long as that dystopia is a rich setting filled with interesting characters and a good sense of being lived-in and layered. Gunslinger Girl gets the dystopia part down, but misses the boat for the setting, characters and grander scope. The book reads as if it had a lot of great ideas on paper, but in execution they largely amount to window dressing.

This extends to our heroine. Pity is a fairly clunky character, able to be forgiven for her initial naivete but doing little to break from the doe-eyed, shellshocked young woman she starts the story as. As a protagonist she has limited agency, largely pinballed between plot points and characters on a whim, and while this is routinely lampshaded by characters - including Pity herself - the book does little to mitigate it. Simply pointing out that Pity feels helpless isn't enough to excuse a heroine whose actions happen at the whims of everyone else. She does gain some confidence as the story progresses, but it comes in drips and never crystallises into making her a particularly compelling character.

But at least she has some character, which is more than could be said for her supporting players. Excepting Pity's cold-hearted boss Selene, the Theatre's flamboyant MC Halcyon, and Pity's kind-hearted artist would-be love interest Max, everyone else in Gunslinger Girl is a flat character, relying on one or two obvious tropes in place of characterisation. Much of the differentiation comes from splitting the cast into their respective roles; the engineer, the bodyguard, the bartender, the mercenary, all of them largely interchangeable apart from names and professions. I could forgive skimping on character detail in order to flesh out Pity better, since the story takes her perspective as its key focus, and there are some authors able to sketch great characters with a lot less, but given that Pity and her players are largely bereft of anything compelling it makes it akin to exploring a world inhabited by cardboard cutouts with cowboy hats.

That problem is compounded when the world itself isn't really notable, a particularly egregious sin for a book that's clearly trying to present a colourful sci-fi western setting. Towns and settlements like Columbia are namechecked, Cessation has a number of street gangs, and a lot of acronyms and titles are thrown around, like CONA and the Drakos-Pryce company, but little of it is established as anything memorable or offering the merest hint of a fascinating world. The settlement of Cessation might as well be Mos Eisley or Sweetwater, a wretched hive of scum and villainy purportedly offering colour, scoundrels, fame and fortune, but actually containing nothing unique of its own. Even the Theatre Vespertine and its Finales - a kind of crowdsourced lynching, where audiences vote on which Theatre act of the night, be it snake charming, knife-throwing or gunslinging, gets to be the means of executing one of Cessation's criminals - offer strands of an interesting idea that the book never pays off as well as it could.

There's also a frustrating amount of hand-waving devoted to time and character interactions. Near the book's midpoint, Pity has an embarrassing drunken encounter with a fellow Theatre employee one night before going home alone, and wakes up hungover the following morning to receive an invitation from her boss for breakfast the next day. The story then cuts to that next day and the breakfast appointment; did Pity just spend the previous entire day in bed, getting over her hangover, interacting with nobody? The book half-heartedly implies that's what happened, but this skipping occurs annoyingly often whenever time or a character interaction has to be swept aside in order for the plot to progress. That may be the key issue beneath which all the others lie. The plot is clearly in a hurry to get somewhere, given the political machinations and hints at plans-within-plans-within-plans, and all of it culminates in a dense, confusing climax where almost every named character (of which there are more than a dozen) shows up with a part to play.

In service of that plot, and whatever impact it will have on the world, the narrative takes precedence over the people meant to be enacting it. Gunslinger Girl is a book with a story to tell, but it fumbles the who and the how in favour of the what and the when; whatever pleasures gleaned from it are fleeting and hint maddeningly at the could've-been of a solid sci-fi western. 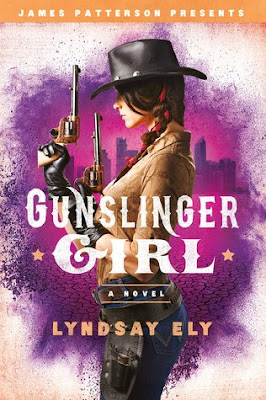