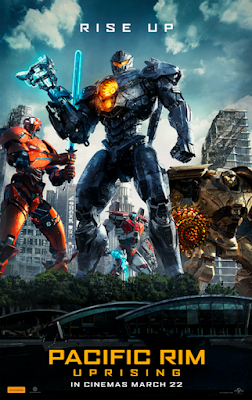 Flashy robots and a charismatic John Boyega can’t save the lacklustre Pacific Rim: Uprising. Now admittedly, I wasn’t a huge fan of Guillermo Del Toro’s original Pacific Rim, so my excitement for this instalment was moderate at best. This film is hampered by an atrocious script that does little for the generic, by-the-numbers storyline. That could be forgiven if the carried more entertainment value, but frankly, I found it boring.

Set 10 years after the events of Pacific Rim, the world is enjoying a time of peace and stability, free of monster attacks. Alas, because the story dictates it, those pesky Precursors return and wreak havoc for humankind. The giant monsters turn up and the punching and explosions commence shortly thereafter. The end.

John Boyega is on charm offensive, with his jokes landing about 60% of the time. He’s aiming for that Chris Pratt rouge-with-a-heart-of-gold routine, but can’t quite nail it. Cailee Spaeny does an admirable job as Amara, the young woman running from personal tragedy but finding her true self in batte. Scott Eastwood proves yet again that the apple has fallen far from the tree and struggles to emulate his father’s onscreen presence. Pacific Rim alumni Rinko Kikuchi, Charlie Day and Burn Gorman have seemingly obligatory appearances with Day getting the lion’s share of the work.

As sequels go, Pacific Rim: Uprising felt about as unnecessary as Independence Day: Resurgence. Both attempt to expand upon a loose mythology which wasn’t particularly interesting to begin with.

If you’re a devotee of Pacific Rim you might enjoy returning to the franchise, but otherwise your time would be better spent elsewhere.