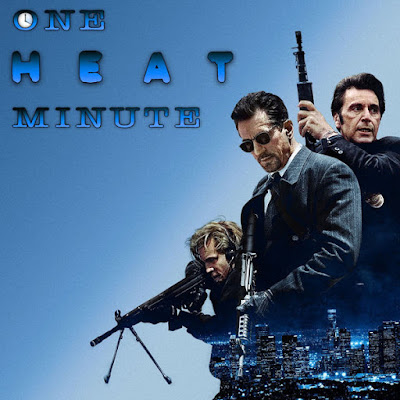 After more than 170 episodes, and 130 hours, unpacking the 1995 LA crime saga, HEAT, one minute at a time, the “One HEAT Minute” Podcast receives its fairy-tale ending by enlisting four-time Academy Award® nominee Michael Mann as its final guest scheduled to air on 6 July, 2019. “One HEAT Minute” Podcast, conceived and executed by film journalist Blake Howard, has proven to be the most original, informative, entertaining and painstakingly detailed analysis of Michael Mann’s classic film HEAT, which has earned its place over time among similarly celebrated and analysed masterpieces.

“Blake Howard’s Cine-essential ‘One HEAT Minute’ podcast may be the most delightfully detailed dissection of a single film since Roger Ebert’s shot-by-shot explication of CITIZEN KANE, and possibly more entertaining! It’s one of the few podcasts in recent memory that could stand the test of time to become a valuable resource for film theorists and casual movie lovers alike. And to have Director Mann, himself, for the final episode to discuss his classic film is just like the final shot in HEAT....the perfect ending to an epic journey.”

"It's a brilliant idea, relentlessly executed with charm, wit, and enthusiasm. Every time I listen to it, I feel the need to rush back to my TV and watch the whole movie again.”

Like Captain Ahab before him, friend of the site Blake Howard has chased Michael Mann across the journalistic and cinematic world. This maddening journey was often been treacherous to say the least, but after several years, he’s finally landed his white whale.

CLICK HERE TO CHECK OUT AN EXCLUSIVE INTERVIEW CLIP