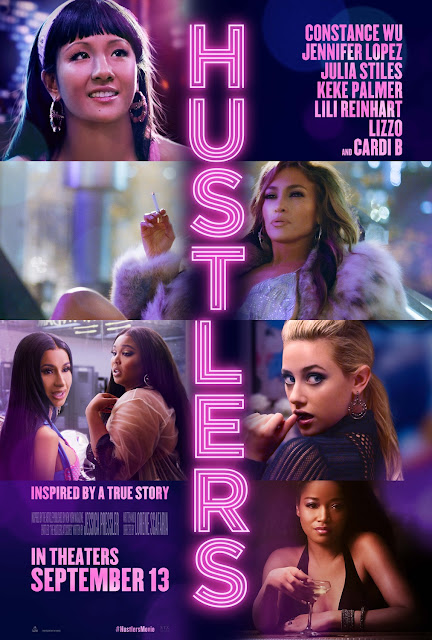 Inspired by the viral New York Magazine article, Hustlers follows a crew of savvy former strip club employees who band together to turn the tables on their Wall Street clients.

“You can either stand in the corner, or get in the ring” - Romona

Hustlers from Lorene Scafaria (The Meddler) explores stripping in New York from a female perspective. Their world is turned on its head by the 2008 Global Financial Crisis (GFC) requiring them to shift gears and do what they can to survive.

I rather liked 70% of what this film has to offer. Sadly the film ultimately bleeds out to quiet a death via self inflicted wounds (namely writing and a mismanaged framing device). In recent years films such as The Wolf of Wall Street, The Big Short and to some extent Jodie Foster’s hidden gem Money Monster have wrestled with the complicity of Wall Street traders which led to the catastrophic crash. I’ve had enough of the preppy white guy in a suit doing badness for a little while. For me, the more interesting stories look at the folks on the peripheries; those who suffered when the money taps were shut off. Enter Hustlers.

Hustlers isn’t exactly condemning the actions of rogue Wall Street traders. If anything it likens the role of trader and dancer. Both opportunistic, thriving on the hard earned wealth of others. Suggesting the world is a strip club; you either have the cash or you’re dancing for it. Pretty sure that’s what Bill Shakespeare was going for with his “all the world’s a stage” take. If there’s money to be made, who cares where it comes. Just fill your pockets while you can. Sounds like a familiar story right?

The story is told predominantly from the perspective of Destiny (Constance Wu) a relatively inexperienced dancer, who gets taken (literally) under the Chinchilla-clad wing of dancing Queen Romona (Jennifer Lopez). The two have an instant bond, which is evident in their onscreen chemistry. I haven’t seen much of Constance Wu’s work, having missed the Crazy Rich Asian express nor have I seen Fresh off the Boat. For me her performance never sufficiently nailed the arc her character experienced; from babe-in-the-woods, Mumma turned shrewd operator and ultimately crashing back down in a heap of self realisation to avoid forcing the same fate she experienced on her own daughter.

J Lo on the other is a force of nature. Her performance is mesmerising. But first, I want to address the over hyped reaction to her physical appearance. It’s kind of unsettling that people are ogling her under the pretense that she “looks hot for a woman her age”. The conversation around her appearance has reinforced the negative stereotypes around female actors and, particularly, how age is yet another factor in the dynamic. Despite how far some have come, it seems that a woman’s looks is still seen as their most valuable commodity. The older they get and the better they look, the better the commodity. While we are less inclined to tolerate this kind of praise for younger actors, all of a sudden a woman hits 40, or 50 they’re free reign. All of a sudden we tolerate everyone reducing J Lo’s epic performance to how hot she’s managed to stay for her age.

That being said, yes she’s super fit, ridiculously strong and will have women signing up for pole-dancing classes. But more than her striking look, there’s an attitude which is the highlight for me. She dominates every moment, whether it’s on stage in micro lingerie or hanging out in or Netflix-and-Chill trackies. Her dance moves exude power, which aren't derived purely from her sexuality. Go watch Out of Sight and give me a call. Jennifer Lopez is still underrated as an actor.

Apart from Lopez and Wu, Hustlers features the likes of Cardi B, Mette Towley and Lizzo. Julia Stiles pops in to prop up the framing device. I’m always super excited to see female stories being told by women. This adds authenticity to the creative process, which we’re crying out for.

Hustlers never feels like it’s exploiting the ladies or leering hungrily at the flesh. Largely due to the fact it’s directed by a woman. Even in the stripping scenes it’s never about titillation. The bump-and-grind for the most part looks like any other boring day job. If you haven’t caught it yet, please check out Lorene Scafaria’s 2016 The Meddler, a sharply written mother/daughter relationship we can all relate to.

Hustlers hits its peak around the three quarter mark, but like most films depicting people up to no good, all good things must come to an end. The back quarter of the film suffers from forced dialogue, drama for the sake of drama and trying to cover too much ground too quickly. Which somewhat distracted me from the great work at the start of the film. That being said, it wasn’t fatal to my overall enjoyment.

Despite my few niggles here and there, I strongly urge you to get out to see Hustlers. It’s a take on the GFC we haven’t seen yet, from people whose stories usually don’t get their moment to shine.