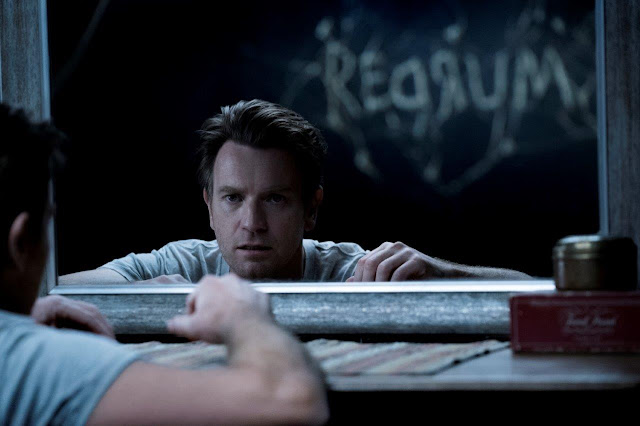 Years following the events of "The Shining," a now-adult Dan Torrance meets a young girl with similar powers as his and tries to protect her from a cult known as The True Knot who prey on children with powers to remain immortal...

On paper Mike Flanagan’s Doctor Sleep faces an immense challenge. Firstly it’s a sequel to arguably one of the most iconic horror films of all time; with a devout, sometimes fanatical fanbase (Room 237). Not to mention it’s dropping a mere 39 years after its predecessor. Next hurdle, it weighs in with a hefty runtime (155mins), which can test the patience of cinema goers. Plus the film must navigate the treacherous waters of familiarity versus ingenuity; showing reverence to The Shining, without being slavish to its iconography. Despite all this, Flanagan manages to deliver a wholly satisfying experience. For the record I haven’t read The Shining or Doctor Sleep.

Now I’m not the biggest fan of The Shining. I appreciate the craft on display and accept that I’m in the minority, but something never sits quite right with me about it. I ventilated these thoughts on an episode of The Sinner Files, the multi-award worthy podcast. Click here to have a listen.

Flanagan smartly bookends the film at the Overlook Hotel. The opening scenes, stimulates the old nostalgia cravings, but importantly exemplifies how aesthetically faithful to The Shining the film will be. Cleverly acting as a promise for what may come in the later acts too. You can’t help but be impressed by Flanagan’s creative choices, he toys with our memories of The Shining and horror tropes alike. But definitely knows how to tease an audience, without ever go for over-the-top gore or cheap jump scares. He’s well aware we all want to see the Hotel. After all it’s the Grand Daddy of horror locations.

Rebecca Fergusson revels as the villainess Rose the Hat. She plays an ancient being who leads a bunch of baddies cruising round eating the life force of gifted children. She’s always a delightful addition to any cast. Ewan McGregor plays the grown up Danny Torrance, who’s still haunted by the events of The Shining, but more importantly grappling with the memory of his father. Newcomer Kyliegh Curran plays Abra Stone, a young girl with ‘Shining” powers that rival Danny’s. She’s being hunted by Rose the Hat as her life force is so overwhelmingly powerful. Cliff Curtis also pops up for a strong supporting effort, which is always fun to see.

I recommend you get out to see Doctor Sleep, but do yourself a favour, make sure you re-watch The Shining if you haven’t seen it some time.

Doctor Sleep hits cinemas everywhere November 7. If you see the film and agree or disagree with my thoughts, feel free to drop a line below