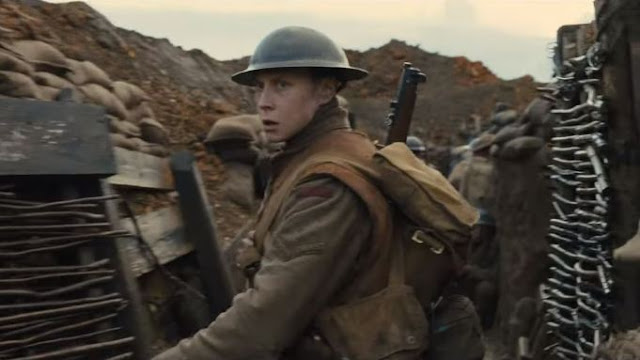 1917 has the best opening act of 2019. To be blunt, it’s cinematic a masterclass. Sadly despite the obvious craft on display, my mind wandered as the film progressed. After some wrestling with my thoughts, I’ve been able to confirm why this is; the film is touted as a “one shot film”, meaning that it is presented as if there are no cuts or editing and we follow the action in real time. Which isn’t in fact the case, because there are subtle cuts and edited moments. My issue isn’t so much the authenticity of the one shot claims, it’s that I find the technique distracting and instead of immersing me in the action, has almost the complete opposite effect.

The film follows two young British soldiers in World War 1 given the unenviable task of crossing enemy territory, in order to hand deliver a message which will save the lives of hundreds of fellow soldiers. The film serves as a testament to the sacrifice and bravery displayed by thousands of soldiers who paid the ultimate price for their service.

For 1917, Sam Mendes has reunited with legendary cinematographer Roger Deakins. There’s no debate that this is technically speaking, probably the film of the year. As the camera seamlessly follows our two soldiers, I pondered upon how they achieved such magic. The camera ducks and weaves around obstacles, serving as a silent observer, but allows the viewer an intimate perspective of trench based warfare. Effective as it is, I’m a far bigger fan of Mendes/Deakins work when they’re not hamstrung by adhering to a specific style. But one must take the film as it is, not as they would want it to be.

Although there are bombastic set pieces, which literally shook the cinema courtesy of all manner of explosions, 1917 succeeds at portraying the humanity of warfare. Focusing on the quieter moments that aren't always celebrated. Be it the unspoken bond between soldiers, or the poignant moments witnessed by a select few. In a lesser director's hands certain scenes may have seemed exploitative, but with Mendes at the helm, we're treated to an emotionally charged, human fueled experience.

1917 hits cinemas on the 9th of January and despite my few niggling reservations, it's a must-see film. In an age where we're seemingly overrun by streaming services and on-demand experiences on our couches, this film proves that certain films demand to be seen on a massive screen with impressive sound. Get out to see this, you won't be disappointed

If you see 1917 and agree or disagree with my thoughts, feel free to drop a line in the comments below