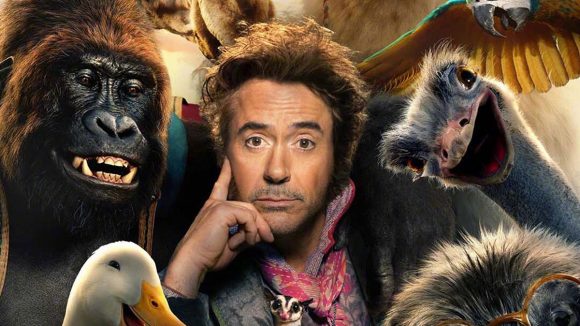 Dolittle toys around with a familiar property and goes within a hair's breadth of justifying the experience. Given it’s chock-full of attempted wonder and ladle after ladle of animal gags, pretty much ensures younger audiences should have a blast with it. For the oldies in the audience, it’s marred by some questionable editing and obvious signs of post-production tinkering.

I’m ride or die for Rex Harrison as Doctor Dolittle; but I’m far from kicking off a #notmydr campaign for this iteration. Tony Stark does a passable job of inventing a newish character, with its own quirks and sense of self. Spurred on by a broken heart, Dolittle is forced to confront demons from his past, whilst letting in the outside world to ensure his future. In fairness there is little territory left to explore within such character arcs, but this does what it can to keep it fresh.

For any version of a Dr Dolittle story there obviously needs to be those cute and cuddly critters to fall in love with. Dolittle employs decent enough CGI effects married with a cast of who’s who of British talent. Seriously, pop over to IMDB and check out who’s lending their talents to the production, It’ll blow your mind.

Midway through the film there is a set piece which takes place on a lavishly designed island which is ruled by a fabulously flamboyant Antonio Banderas in full flight. The entire portion of the film reeks as though it was cobbled together from in post-production. There's narration used to cover up the fact we missed out on seeing entire connective scenes, action sequences which make no sense in their context and others which were clearly re-shoots used to patch up the the shortfall in the narrative.   It’s such a shame, the disjointed nature really undercut the production values. At times Dolittle is almost on par with say Pirates of the Caribbean: The Curse of the Black Pearl in terms of whimsy and romantic fun (not the kiss kiss kind of romance). Sadly these moments are fleeting and ultimately ground to dust by the inevitable nature of big studio productions.

Notwithstanding my niggles with it, Dolittle gave me way more chuckles than I was expecting and I’d happily see further installments down the road. Much like RDJ’s take on Sherlock Holmes, at least it differentiates itself enough to warrant the exercise. I can’t say it’s a must-see experience, but parents could do worse than seeing this with kids over school holidays