Redline made a massive splash in Australian cinemas during its theatrical release during "Reel Anime 2010". Now, Madman have released the madness for us homebodies on Blu Ray and DVD. On your mark, get set, GO!

"REDLINE is the biggest racing tournament with the most deadly racers in the universe. Only held once every five years, everyone wants to stake their claim to fame, while organised crime and militaristic governments want to leverage the race to their own ends.

JP is a dare-devil reckless driver oblivious to speed limits with his ultra-customized wheels named “TRANSAM 20000.” Among the elite drivers, will the ultra hot Sonoshee prove his undoing or can a high speed romance survive a mass destruction race?"
Redline was a work in progress for what seemed to be an eternity. Incredibly, the wait was entirely worth it as the production values and overall quality speak of the time taken and deft hands involved. In my recent review of Darker than Black Season 2, I stated that it benefited from the fact that it wasn't based upon any previously published source material such as manga or light novels. So too does Redline. It is free to create a world that feels somewhat like Tatooine. In fact, there are certain parts of the film that feel just like a Pod Race apart from the fact that these animated characters are more lifelike than young Anakin (Are you an Angel? *Ugh!*). The freedom that is gained from being able to spread its wings assists to inject that new and fresh feeling, even though it has a setting that is recognisable all the same. 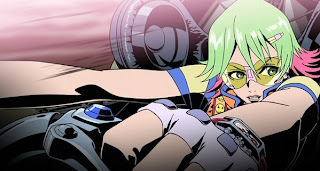 First time Director Takeshi Koike had some grand expectations to fulfil which he does so admirably. Considering the scale, production value and expectations of this film, he must have felt the pressure. Thankfully he performs admirably and creates a film that is up there with the best of them. I wouldn't quite call it an instant classic but it is certainly up there with the best of them. Redline in itself felt like the last saviour for feature length anime films, many of which have suffered by dwindling sales both at home and abroad. From its success the anime industry can take stock in the fact that it can still prosper while taking a punt.
The animation style is beautifully warped, twisted, vivid and frenetic. Madhouse (The Girl Who Leapt Through Time, Summer Wars, Rideback) have truly excelled in creating a visual style that is all "Redline". The action sequences move along at an absolute break neck speed but are every bit as refined as you could hope. The distorted proportions of characters was at times slightly reminiscent of the Aeon Flux series, which is in no way an insult. The vehicle designs are just as varied and unique as the character designs while still maintaining a level of familiarity with JP's car resembling a heavily modified 1969 Pontiac Trans Am. 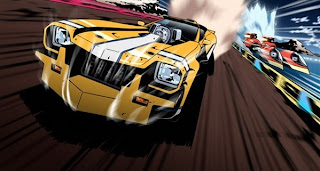 Almost 2 years before I managed to watch the film, I had bought the soundtrack from Tower Records in Shinjuku. The soundtrack by James Shimoji is just as electrifying as the animation itself, an onslaught of electro beats which dance on this side of dubstep, not quite heavy enough to require a Panadol but still holds that constant thump to urge the racers closer and closer to the finish line.
Redline is like the crack-baby of a Star Wars Pod-Racer and Penelope Pittstop. Turbo charged white knuckle action which relentlessly assaults the sense on every level.
Redline is available on DVD and Blu-Ray from Madman now.
Anime James Shimoji Madman Redline Review Reviews Takeshi Koike