Bunny Drop, based on the manga and anime series of the same name by Yumi Unita, tells a tale which, while wildly left of centre, is able to be appreciated at its most basic level by anybody who has ever had to make a major change in their life for the good of another.

At his grandfather’s funeral, 27-year-old Daikichi discovers a family member he never knew he had: six-year-old Rin, his late grandfather’s illegitimate daughter. Abandoned by her mother and left alone by her father’s death, little Rin has nowhere to go. When Daikichi takes pity on her and decides to take her under his wing, the sudden change for both of them brings Daikichi to understand what it takes to be a single parent. This award-winning heartwarmer features acclaimed child actor Mana Ashida - Japan Foundation

At the centre of this film, at its thematic core, is sacrifice. Daikichi (Kenichi Matsuyama) is the consummate bachelor, a 27 year old salary man who has nothing, and no one, in his life external to his career. When he takes in young Rin (Mana Ashida), he has to make a number of sacrifices just to make his new life work. This theme in itself should resonate strongly with any parent. Upon having a child, your life will never be the same. You have to change jobs, your social life suffers, everything costs more and yet, you wouldn't change it for the world. This is Bunny Drop. 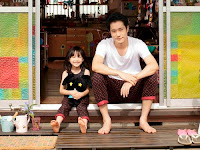 Matsuyama is somewhat of a wunderkind in the realm of Japanese cinema. Having starred in recent hits such as Death Note, Detroit Metal City and Gantz which screened at last years JFF, he appears to be the poster child for films based on manga. Regardless of the source material, Matsuyama proves in this film that he is capable of any acting role. As Daikichi he displays an earnestness that is thoroughly endearing and perfectly encapsulates that persona of Daikichi. Further to this, he displays the comedic timing of a seasoned pro, proving that he deserves his place as one of Japanese cinemas heavy hitters.

In terms of casting, model turned actress Karina performs well as Daikichi's love interest Yukari but the most impressive performances in the film belong to Mana Ashida. Only 7 years old at the time, Ashida is not only cute as a button but delivers a performance that belies her years, drawing tears and laughs she proves that even children are capable of being professional actors. This is one little actress whose career will be one to watch. While actors deserve a great deal of credit for their own performances, so to do directors deserve credit for eliciting and capturing their performances. As such, Sabu deserves a great deal of credit for piecing together  a film which is both gut-wrenching and heart-warming all at once.

While only retelling a small amount of the manga anime, Bunny Drop is one of the most beautiful stories you are likely to see. Fantastic performances and a story that is firmly focused on the human condition meld together to create a film that proves that sacrifice isn't a dirty word and, if made for the right reasons, can actually be outweighed by the positives gained. Bunny Drop is beautiful, an utter delight.