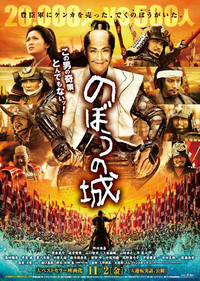 The Floating Castle is an epic period piece that focuses on a true story that is seemingly too insane to be true.

Like a Japanese version of Frank Miller's 300, it tells the tale of a small army who take on against a far superior force, utilising the element of surprise and a whole tonne of nouse to battle against the odds.

It’s the sixteenth century, and all-powerful warlord Toyotomi Hideyoshi has conquered most of feudal Japan – with the exception of Oshi Castle. Known as the Floating Castle, it is commanded by Narita Nagachika, a popular but buffoonish samurai whose battle strategies are unusual to say the least. As Hideyoshi’s 20,000-strong army closes in, Nagachika’s 500 men prepare for the battle of their lives. An award-winning epic saga based on actual historical events - Japan Foundation

The Floating Castle is a very long film and unfortunately, you will be well aware of every single one of its 140 minutes. Most disappointingly, this film is an action comedy and not a drama with action sequences. What this does is make light of feudal Japan, particularly at the hands of the main character, Lord Bone who seems to channel Charlie Chaplin in delivering a performance that would be more befitting Akmal Saleh on "Thank God You're Here" than an award winning film festival favourite.

The film shows so much promise but delivers very little, even in terms of visuals. While the actual backdrop is, for the most part, flawless it is the heavy handed use of CGI that truly mars the overall aesthetic. While no one would expect for scenes of mass flooding to be recreated on a set, the CGI used looks quite terrible and would be more at home in B-grade horror than a big budget feature. That said, the sets and costumes are all top notch and are at times a saving grace for the film as the serve to restore the feeling of immersion that is instantly destroyed by that horrible... horrible CGI.

With the exception of Lord Bone, the performances of nearly all of the actors involved are of quite a good quality. Of note is the inclusion of Bunny Drop star, 8 year old Mana Ashida, who proves that she wasn't just a one trick pony. While only playing a small part in The Floating Castle, she shows that she's got chops. Also on the casting sheet is Takayuki Yamada who, after appearing in Takashi Miike's 13 Assassins, shows that he is at home and excels in just about any period piece. Somehow, however, The Floating Castle just misses the mark and fails to deliver drama where it should be delivered in spades. Even in sequences wherein a city is on the verge of being engulfed by water, Madame Drama fails to raise her precious head.

Overall, The Floating Castle is a frustrating affair purely because it could have been so much better. For an epic story of battle and survival it never truly grasped its potential and instead settled for cheap effects and laughs that do a disservice to a very interesting moment in Japanese history.