One Piece: Pirate Warriors 2 ready to dock in 2013 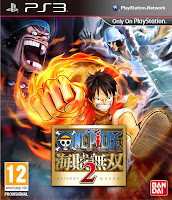 From the images available, Pirate Warriors 2 looks to be bigger, better and even more polished than the original. Focussing on the later stages of the manga series, Luffy and his crew explore the "New World", encountering new locations and of course, new enemies.

Colour me excited and follow after the jump for the full press release!

CERGY-PONTOISE, FRANCE – 10 December 2012 – NAMCO BANDAI Games Europe S.A.S. today announced that the next game based on the global smash ONE PIECE manga and anime, ONE PIECE: PIRATE WARRIORS 2, is coming to PlayStation®3 in summer 2013.

Developed by Omega/Tecmo Koei, ONE PIECE: PIRATE WARRIORS 2, will come packed with piratical new features. Players will step into the shoes of characters including Luffy, Sanji and Zoro and join the rest of the irrepressible Straw Hat crew for all new adventures in the “New World” story. The game will also feature previously unreleased stages such as Skypiea and new characters including Eneru for the first time ever on PS3.

The successful ongoing collaboration between TECMO KOEI GAMES and NAMCO BANDAI Games Inc. has resulted in sales of the first opus, ONE PIECE: PIRATE WARRIORS, reaching in excess of 1.2 million units worldwide. The collaboration combines the leading manga franchise with top fighting action to create the perfect ONE PIECE video game experience.

To celebrate 1.2 million sales of ONE PIECE: PIRATE WARRIORS, NAMCO BANDAI Games Europe is pleased to offer a special discount exclusively on the digital version of the game and on all the downloadable content released so far. This special “digifest” promotion will be available via PlayStation®Network from December 12-26th, so be sure to bag the perfect pirate gift this Christmas.

“I am very pleased and proud to say that we have successfully shipped 1.2 million units of ONE PIECE: PIRATE WARRIORS worldwide, and we are glad to continue working on this fantastic franchise with ONE PIECE: PIRATE WARRIORS 2 to keep all the fans happy,” said Koji Nakajima, producer of ONE PIECE games at NAMCO BANDAI Games Inc. “It’s thanks to all of you, the people all over the world who bought the game, that I am able to announce this great news.”

ONE PIECE: PIRATE WARRIORS 2 will feature the best-loved characters from the latest anime series. Using the simple controls from the Dynasty Warriors series, players will be able to enjoy a fresh gameplay experience, including battles against boss characters such as Eneru which are made possible only by incorporating these control features.