Back in October we reviewed the first half of Batman: The Dark Knight Returns and now, just over 4 months later, the epic conclusion hits shelves Australia-wide.

It is difficult to review this DVD without it also being a review of the source material which is an absolute classic by any measure and with this film being as faithful as it is, a review of the story is bound to be glowing.

After the Joker feigns rehabilitation, he does what the Joker does best and comes back under the notice of an ageing Batman. After a series of plot twists and action galore, Batman faces off against an unmovable force, making for one of the most iconic scenes in the history of DC comics.

This second DC Universe animated film more or less encapsulates the 3rd and 4th books in the classic Batman story by Frank Miller. Anyone who is abreast of the comic mini-series or subsequent graphic novel will know the story and its thrilling ending because, thankfully, director Jay Oliva follows the story almost panel for panel and leans heavily on some of the most iconic images in the DCU. The animation style and character design toe the Miller line giving Batman an angular, gruff exterior while Superman becomes a cartoon version of himself, a boy scout who is as much a puppet of the Government and media as he is a superhero. This is an example of Miller's trademark cynicism and a product of its time. Created during the mid-80's, The Dark Knight Returns is full of cold-war commentary if you choose to look for it. Including an attack from "commie" enemies. Thankfully, this message isn't forced down your throat. That said, younger viewers may not have a complete appreciation for the films setting.

This second part in particular is a treat for DC fans purely because of the vast number of cameos. Instead of being introduced to superheroes who are still attractive and well to do, we see an overweight washed up Selina Kyle and Oliver Queen more broken than ever before. This is somewhat of a refreshing take on superheroes in general whom we generally only see in the prime of their lives. Much like Alan Moore and Dave Gibbon's Watchmen, we see that being a hero or villain will only benefit you for a short time before the world leaves you in its wake. 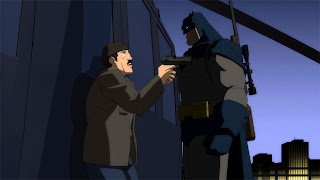 Once again, voice director Andrea Romano hits the nail on the head with her casting decisions. While it is a little jarring to hear Batman being voiced by someone other than Kevin Conroy, Robocop himself (Peter Weller) fills the cape and cowl admirably. So too does Michael Emerson who plays a wonderfully subdued Joker which is somewhat of a departure from the source material. Introduced in this film is Mark Valley as Superman and he delivers a performance that highlights the frustration of a Superman who does little more than serve the man.

The ending alludes to a possible sequel based on Miller's Dark Knight Strikes Again from 2001. I for one would be more than happy to see old man Bats return in the animated form, Batman: The Dark Knight Returns Part 2 was a blast. The most shining observation that can be offered is that this second part of the 2 part film series manages to live up to the source material and, while it would never surpass the original, manages to stand alongside one of the greatest Batman stories ever told.