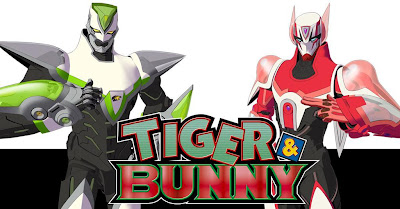 After giving such a glowing review to Part 1 of Siren Visual's Tiger & Bunny release, it feels great to jump straight on in and review Part 2.

Things are really starting to heat up in Sternbild City with Tiger & Bunny both facing off against the alleged killer of Barnaby's parents. This seemingly untouchable NEXT has taken down all who face him and looks to keep the secret of Ouroboros to himself. Will Bunny find out who killed his parents? Will Tiger score a damn point this season?

Something would have to be seriously wrong for me to dislike this second release and thankfully, all is right with the world. While Part 1 was awesome fun, Part 2 actually brings with it more heart and more reason to become emotionally involved with the characters in Tiger & Bunny. Kotetsu/Tiger especially goes through some real hard times that further reinforce that he's a heroes hero. He's not in it for the glory, the points or the fame. We start to learn why he became a hero in the first place. Knowing many people in law enforcement, emergency services and the military, it's a familiar story. Heroes, people who put their lives on the line for others, always have some sort of motivation that is bigger than themselves and it really felt as though this second part in particular promoted this fact. Even when his back was against the wall and he had no hope of getting back on his feet, he kept fighting. Simply put, Kotetsu/Tiger is just an out and out good guy and we see that through his interactions with his fellow heroes and family members.

In this part of the story the seclusion of Tiger was very well executed. After Part 1 did such a great job of focussing on most of the other heroes, Part 2 begins to wrap up the story with plenty of time to spare. Villains are revealed in shocking plot twists which, frankly, I didn't see coming. Bunny's character is explored so much more in the latter stages and, to be brutally honest, he's far less annoying and mopey than he was earlier on. There is just as much humour and even more action than before and as things progress, the action starts to develop some weight. The stakes are higher and the outcome less certain. In short, as the series begins to build to a thrilling crescendo, the drama swells and adds to what is undoubtedly a fulfilling payoff. The story still does a fantastic job of satirising American comic books and shonen manga/anime with catchphrases and cheesy poses galore. I also feel as though it has a dig at tokusatsu series like Kamen Rider with it's camp transformation cut scenes and voice over. You could almost interchange "Good Luck Mode" with Kamen Rider's classic "HENSHIN!" catchcry.

The animation in this part is every bit as fantastic as the first, however, there is a noticeable difference in quality between the DVD and Blu Ray releases. In no way could you say that the DVD release is bad, it's just that the Blu Ray release is superior in terms of picture and sound quality. This is the kind of series that all but demands to be watched in high definition. It almost feels like a disservice to studio Sunrise to watch it any way other than on Blu Ray. Thankfully, Siren price both their DVD and Blu Ray releases the same so if you already have a Blu Ray player, it won't cost you extra. Bravo Siren, bravo!

I can generally judge how much I like a series based upon how much I shop for merchandise after watching it. That said, I've spent hours looking at FiguArts figures, iPhone covers, t-shirts, tea towels, posters, clear files, wall scrolls... the lot! Tiger & Bunny is an incredibly exciting and dynamic series that I'm very pleased to have on my shelf. The fact that this release also comes with the same Hero Monthly magazines and trading cards is just the icing on the cake. That said, try and grab the Blu Ray release if possible, it's just that little bit more polished than the DVD incarnation. Heck, I may have to replace this DVD version!

Don't forget, Siren have also announced that they will be releasing the first film, Tiger & Bunny - Beginning, at some point in the near future. Anime News Network had reported at a July release but it looks as though it may be as late as September. Regardless, it's on its way!