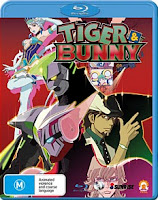 Tiger & Bunny sure took its time getting to our fair shores but was the wait worth it? Hell yes.

I'd had my eyes on this series since it first hit streaming services and it always struck me as being an odd blend of American superheroes and Japanese animation. For once in my life, I was totally right.

Welcome to Sternbild City circa NC 1978. The city is home to millions of everyday folks and a handful of super powered individuals known as "NEXT". Of course, wherever there's superheroes, there will be supervillains. Each of these superheroes is sponsored by real-life corporations including Pepsi, Softbank and Bandai while they take part in a show called "Hero TV". Each hero is awarded points for their heroic deeds, all in the hopes of being named this seasons "King of the Heroes".

Being a longtime American comic book fan, I appreciate the amount of satire that is imbued into the shallow lives that are often put on show in capes comics. It really is the kind of silliness that deserves to be the butt of many a joke and Tiger & Bunny nails it. Satire aside, it also manages to deliver a story that focuses just as much on friendship as it does on superdudes. The relationship between Kotetsu (Tiger) and Barnaby (Bunny) is a rocky one to say the least. An odd couple from the get go, they slowly but surely begin to realise that they are both heroes for the same reason - they want to do good. Thankfully, this element of the story is intertwined amongst an overarching story involving a clandestine corporation and the killer of Barnaby's parents (Batman, anyone?).

We are introduced to a whole swag of heroes in this series and like any super team, they all have their own look and powers. The stars of the series are, of course, Tiger and Bunny, but each character seems to get their moment in the sun and enough time to validate their position in the series. The character designs by Masakazu Katsura are absolutely brilliant and show the forethought that was put into the overarching story and future merchandising possibilities. Small character design elements such as the opaque details on Tiger and Bunny's costumes just add to the effect. Not only do the characters look cool, but the product placement doesn't even look odd, unlike Greg Kinnear's "Captain Amazing" in Mystery Men. Each of these characters have their own egos which are as sizable as their feats of strength. While not an entirely new concept, Tiger & Bunny does it exceptionally well and refrains from making their occupations seem unsightly.

The animation quality is awesome which should come as no surprise considering the fact that Sunrise is responsible. What they bring to the table is not only experience in traditional animation but also in the integration of traditional and CGI animation as seen in Gundam 00. The characters costumes are predominantly CGI while their faces are hand drawn. Thankfully, it's generally seamless and the suits benefit from the level of detail that only CGI can provide. Keiichi Satoh, the man behind the brilliant mecha noir series Big O (Batman, anyone?) knows how to use a city and Sternbild is no different. The gorgeous, art deco inspired locale is absolutely inspiring and is a character in its own right. Unfortunately, the characters don't spend a great deal of time exploring the city unless they're busting it up but regardless, it looks incredible. This is the kind of series that you should grab on Blu Ray if possible. The picture is incredibly sharp and highlights the work that has been put into each character and background.

This is without a doubt one of the best quality and best value releases in Siren's catalogue. Not only do you get 2 HD discs of awesome anime, but you also get it housed in a beautiful cardboard slipcase which contains 4 issues of "Hero Monthly" and 4 trading cards. While Siren are generally known for releasing lesser known and less mainstream titles such as Shiki, Kaiba and No. 6, Tiger and Bunny seems to be somewhat of a flagship title for them and rightly so. I absolutely loved this release.