Interview with Simon Pegg & Nick Frost of The World's End

Wednesday the 17th of July 2013 will go down in history as one of the best geek days of my life. This was the day that I interviewed Edgar Wright as well taking part in a roundtable interview of Simon Pegg and Nick Frost. A big thanks to Shane, Jorge from Spotlight Report and the man behind Graffiti with Punctuation and 2UE's That Movie Show, Blake Howard.

Leading up to the roundtable interview with Simon Pegg and Nick Frost, I had an encounter with the lads that will remain in my memory forever.

I'm under no illusions as to how lucky I am. I've had the pleasure of speaking to a number of my favourite creators and actors in the last few years and generally, these opportunities have fallen in my lap. This brings me to Edgar Wright's The World's End. Just as with my interview of Neil Gaiman, I received an email offering some time with the lads. An offer that I quickly and wholeheartedly accepted. While not every interview makes me so nervous, this one had me sweating bullets. I have incredibly positive memories of both Shaun of the Dead and Hot Fuzz with both films holding a special place in my heart and mind. While managing a number of Video Ezy stores in Sydney's inner west I held a film night with a number of staff members which assisted in making Shaun of the Dead my go-to recommendation. Not a single customer complained about this fact. Hot Fuzz, on the other hand, was on high rotation during night shift in my current occupation. The irony of this fact should not be lost on those who know me.

Anyway, as I usually do, I arrived 40 minutes early at a plush Sydney hotel to interview director Edgar Wright. On my way up to the media holding pen I passed Australian Olympian Geoff Huegill and had to remind myself that there were bigger fish to fry on this day.

A short time later I spoke with Mr Wright, the results of which can be found HERE. With a couple of hours to spare, I wandered off to have blood taken before staggering back to resume my place in the media scrum. Upon approach I saw a man who looked incredibly familiar out the front of the hotel. I must have been staring longer than I had realised because the chap in front of me smiled, waved and held out his arm to shake hands.

In a light headed stupor, all I could manage was an incredibly eloquent, "waa.. oh wow" which seemed to catch the attention of Nick Frost who was standing with his back to me.

"Hello mate, how'd your blood test go?" he asked without a flinch before also shaking hands. The quizzical look on my face left Frost with no choice but to point to a small Band-Aid in the crook of my arm, wink and give a wry smile. 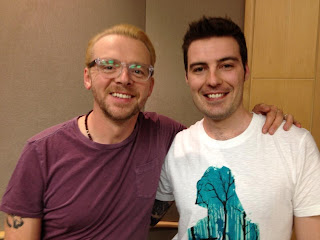 At this point I was entirely sure that I must have given a wee bit too much blood. Surely I must be dreaming. "It was great, thank you... Nick Frost..." Holy Obi, I was actually speaking with SIMON PEGG AND NICK FROST!

"Sorry if I seem a little off," I managed "but I just gave blood so I'm a tad light headed and now I'm talking to you guys. I just saw you in a movie two days ago!". Yep, I'd officially fanboyed. There was no returning from this. I may as well just run with it. "I loved the film, by the way. I'm here to interview you later in the day".

"Ah, I thought as much." said Pegg, "Can I give you some advice?" as if I would say no. "Make sure that you're aggressive. People can get a bit pushy with these things. Make sure you've got your questions all ready and get in there".

"Of course!" I said. I'd been mulling over these questions from the moment that Universal sent me that fateful email.

"Because if you aren't aggressive," said Frost, poking me in the chest, "we'll pull you aside and ask you why you didn't get in there". By this point I was positively beaming. Not only had I just been speaking with Simon Pegg and Nick Frost, but I also had another chat pending.

"Great shirt. I like that" said Pegg, gesturing at my Olly Moss Return of the Jedi t-shirt.

Click the play button to stream our interview or right click HERE to save as an MP3.

At the end of the interview I was lucky enough to get a quick chat with both Frost and Pegg. I felt as though I should explain why I was so giddy when speaking to them earlier in the day. 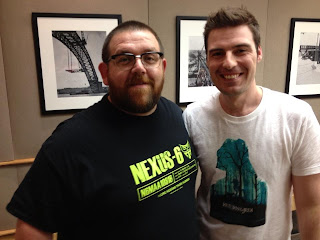 "Mr Frost," I started, "I feel like I should explain why I was so vague and odd earlier today."

"D'you want to grab a picture?" he replied before graciously telling me not to worry.

"It was just such a surreal experience," I explained, "I'm such a big fan of yours so my awe was somewhat compounded by having just given blood".

"I thought your skin looked a bit baggy" he said. The result of which is possibly the dorkiest face I have ever pulled in a photograph as I try to hold back a laugh. Dork face or not, I'll treasure it.

A massive thanks go out to Universal Pictures Australia for such an incredible opportunity. They're always looking out for us little guys and I can't possibly thank them enough.