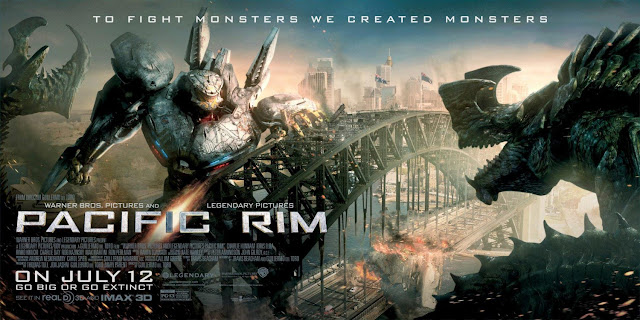 Over the last few years, Guillermo Del Toro has been involved in a whole bunch of films as Producer, Executive Producer, Associate Producer and even as a voice actor but Pacific Rim is the only film he has Directed since 2008's Hellboy II. That said, Del Toro's five year directorial lull has done nothing to diminish his ability for making an incredibly fun film, an incredibly fun film like Pacific Rim.

The world is under attack from giant monsters known as "Kaiju" which arrive from a parallel plane which is linked to Earth by a portal in the Pacific Ocean. After realising that tanks and guns are little use, we humans hit back by creating our own monsters that we have affectionately named "Jaegers" (German for hunter). Years of battling may have made the humans more resilient but with kaiju attacking more frequently, a change in tactic is required. This is the basic premise that we receive via a colourful introduction in the films first 5 minutes. While I'm not generally a fan of wordy exposition, this particular attempt is short and snappy enough to deliver information without talking down to the audience.

For a lifelong anime geek, Pacific Rim is a dream come true. For years we've heard rumours about Peter Jackson's involvement in a live-action Neon Genesis Evangelion film but with nothing to see for it. Pacific Rim, on the other hand, seemed to pop up from out of nowhere and is a dream come true for geeks the world over. In fact, in the opening sequence we are introduced to Raleigh Becket, his brother Yancy and their Jaeger Gipsy Danger, the background music sounds very similar to that composed by Shiro Sagisu for Evangelion. Perhaps a coincidence, or a nod to anime fans. Regards, there were a number of times throughout the film that I found myself comparing the film to anime and Japanese cinema franchises, particularly Tetsujin 28-go (Gigantor) as well as Toho's Godzilla films and spin offs.

Visually, Pacific Rim is one of the best looking films I've ever seen. Everything in this film looked fantastic and it is obvious that Del Toro assembled a group of designers that are at the top of their respective games. The mech, costume and production design were all fantastic and seemed to be imbued with the sensibilities of Masamune Shirow and Mamoru Oshii. The human characters battle armour and various accoutrement were very Japanese in design, focussing on both style and utility. The slightly futuristic version of Hong Kong, however, looked to be a Blade Runner inspired version of a Geof Darrow illustration. What I'm trying to say is that the entire film is an absolute visual feast. Furthermore, Pacific Rim is the only film that I have ever seen to convince me that 3D has potential beyond cheap gimmickry. The amount of depth in this film is astonishing and assists in building the incredible scale necessary for an epic monster movie. While entire buildings crumble under the might of the Jaegers and Kaiju but unlike Man of Steel, the buildings are evacuated which leads to guilt-free gawking at widespread damage of catastrophic proportions.

It's always great to see a film wherein none of the actors are Hollywood A-listers, this allows for a suspension of expectation or bias. Charlie Hunnam portrays the everyman well, although his hulking bod makes him far from average, and delivers and earnestness necessary in such a ridiculous premise. Idris Elba creates a character that is increasingly likeable even through his heavy handed stoicism which is offset by comedic performances from Burn Gorman and the hilarious Charlie Day who comes across as equal parts Rick Moranis and Bobcat Goldthwait. However, regardless of the acting experience on screen, the greatest single performance belongs to Japanese youngster Mana Ashida. Star of last years Bunny Drop, which we reviewed during the Japanese Film Festival, young Mana is an incredible talent that will be one to watch in coming years.

Pacific Rim is an incredibly fun film and a treat for the eyes, ears and geeky portion of the heart. This is the sort of film that I've been waiting for since I first saw Robotech, Patlabor and Gigantor as a child. Sure, the first Transformers film was a touch of fun but Michael Bay ain't got nothing on Del Toro. In fact, instead of creating a 2 hour Army recruitment commercial,  Del Toro's decision to use the titles "Ranger" and "Marshall" make it feel as though these people are more akin to kaiju Police and not a military organisation. In short, as a self-described pacifist, it appears as though Del Toro is doing his best to assert that war isn't cool.

Pacific Rim is the most fun film I have seen in a very long time and is in cinemas Australia-wide on July 11th.