In the spirit of full disclosure I will happily admit I did not watch James Wan’s Insidious back in 2011 because I came down with acute blindness…my car broke down that day…no wait my dog died… alright already it’s cause I’m a scared-y cat when it comes to such films. Luckily with some recent horror classics under my belt I boldly walked in to Insidious: Chapter 2 and only shrieked twice from behind my seat but keep that between you and me. Whilst it’s an entertaining film it all felt a little too familiar, partly because it has so many references to other films of the genre but also because James Wan has already released The Conjuring this year, which Ali reviewed to moderate praise.

As I mentioned earlier I haven’t seen the first film but the plot is not too hard to follow. Apparently there is a rather nasty spirit who is terrorising the Lambert family. Oh you know the type, they cruise around when everyone is asleep and always have a sneaky agenda in the land of the living which relates back to some past trauma. They love interacting with children’s toys and always seem to live in or near Victorian era wardrobes. As the hostilities increase so does the mystery, culminating in a predictable albeit satisfying ending. Picture a gentle blend of Poltergeist and The Shinning with a splash of Drop Dead Fred. Its schlocky-well-intended genre-fun, what’s not to love?

This film lacks the polish of The Conjuring but retains the basic framework in terms of how the scares are delivered. Long tracking shots, close ups to show the terror, tight hand held shots in corridors and good-old-fashion jump-scares are the order of the day. Whilst Wan is an accomplished director however at times he is guilty of throwing too many scares at the audience. I would happily take better crafted scares even if it meant reducing the overall number of jolts to the system. I found myself bracing for impact any time the creepy music kicked in and the camera started slowly panning around, with time Wan’s directorial poker face will improve. That being said I’m really looking forward to what he is going to do with Fast and Furious 7, given his penchant for practical effects over computer generated wizardry. 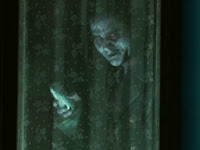 The performances are well suited to the material. I particularly enjoyed Patrick Wilson as Josh Lambert, the father of the family who has just one or two teeny-weeny-issues going on. Rose Byrne gets to show off her manic side which is always fun. The standard issue comedic relief is handled admirably by Leigh Whannell and personal favourite Angus Sampson. The cast is a great ensemble of character actors which helped elevate the at times choppy screenplay, and with nearly the entire cast returning from the first film there was a familiarity and obvious chemistry on display.

Despite the disposable nature of the film, I definitely got a few scares and few laughs from it. Without dabbling in spoiler antics the film strongly hints at a chapter three that I’d happily turn out for.

Insidious: Chapter 2 is in cinemas from Thursday the 7th of November. If you agree or disagree with my thoughts feel free to leave a comment below.