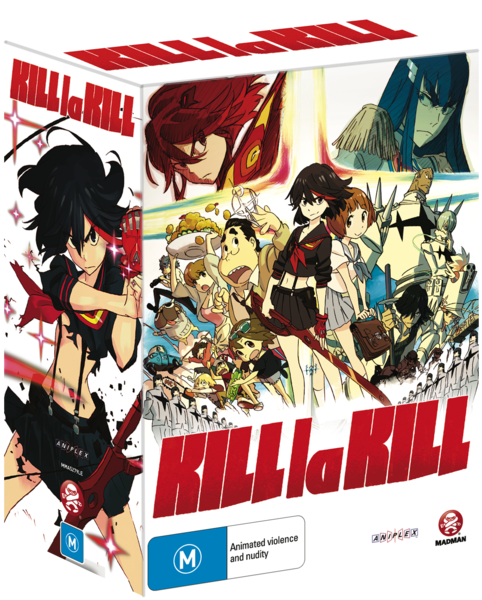 Kill la Kill is nuts. Not quite FLCL nuts but nuts all the same. This series is equal parts Battle Royale, Sailor Moon and FLCL in that Ryuko Matoi finds herself being transformed into a bad arse, fellow student thrashing monster thanks to her anthropomorphic school uniform. Pretty in so many ways, Kill la Kill is one of the more irreverent series to hit screens in years.

Honnouji Academy - where the school is ruled by students clad in special outfits called Goku Uniforms. Deriding the student body as "pigs in human clothing," Student Council President Satsuki Kiryuin, along with her loyal underlings, the Elite Four, has the academy under their absolute control.
One day, a vagrant schoolgirl named Ryuko Matoi appears and tries to get Satsuki, who recognizes her Scissor Blade, to talk. Was their encounter a mere coincidence or fate? The clash between the two will soon consume the whole academy!

Animated by the reasonably new studio TRIGGER, Kill la Kill bears many of the hallmarks of GAINAX animation which makes perfect sense since the newly established studio is made up of former GAINAX staff members. The animation flits between top notch contemporary anime styling and an almost Cartoon Network-esque aesthetic which punctuates comedic beats. Another established trademark of GAINAX, which was first utilised to great effect in FLCL, is the use of particle effects which TRIGGER has recreated perfectly. Whenever dust or explosions occur, it is accompanied by animated particles which give a distinctively layered feel to the scene.

The animation quality in general is fantastic, highly polished and scrubs up tremendously on Blu Ray. The character designs are all memorable, if at times a little heavy handed on the fan-service. That said, this is a series that comes across as being incredibly self-aware in so much as fan service serves a double purpose by offering both bleeding noses and a laugh at the expense of the viewer themselves, that is to say that the fan service is both confronting, ridiculous and walks a fine line between being laughable and offensive. This is generally due to the design of Satsuki and Ryuko’s costumes and transformations which both feature a rather questionable shot of a … *ahem* … front wedgie.

As with Gundam Unicorn, Attack on Titan and Blue Exorcist, one of the greatest features of Kill la Kill is the soundtrack which is supplied by my new favourite composer Hiroyuki Sawano. While the soundtrack is at times drowned out by sound effects and dialogue, as it should be, the notable melding of rock and electronica provides a meaty foundation on which to build a very memorable anime series. This is just another example that makes me pine for a local collector’s edition release which includes the soundtrack. One thing is for certain, as his track record currently stands, Sawano can do no wrong.

The collector's box contains, well, the box, as well as a few gorgeous postcard sized art cards which wouldn't look out of place framed and mounted. It’s great to see something in addition to the usual cardboard box included in the collector’s edition, particularly when they’re as high quality as these cards. While a soundtrack, t-shirt or other goods would be awesome, for a measly $5 more, the box and art cards will make a good addition to any fans collection.

Kill la Kill is a fantastic series which is filled with laughs, awesomely insane battles, fantastic animation, a brilliant soundtrack and more WTF moments than you can poke one-armed scissors at. In only 4 episodes, this release teases that there is far more happening at Honnouji Academy than meets the eye and if volume 2 is anywhere near as nuts as this first release, I’m in!