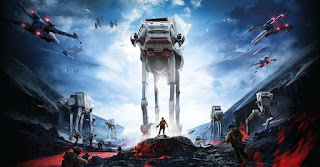 DISCLAIMER: This review uses images from the upcoming Star Wars: Battlefront video game. This book is also technically not part of the Journey to Star Wars: The Force Awakens series, but given its proximity to the film it may as well be.

That said, this review will contain NO SPOILERS for Star Wars: The Force Awakens.

Yeah, I try to forget about it, too. 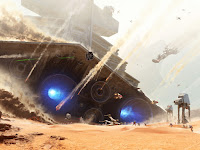 The problem with game tie-in novels is that, with rare exception, they fall into one of two categories. They're either blatant marketing and advertising exercises, designed to sell you on how great the story could be if you were a direct part of it (which affects books from Assassin's Creed, Gears of War and most of the Halo novels), or they're excellent stories which would see much wider readership if they weren't afflicted with the stigma of being a game tie-in (especially for books like Halo: Ghosts of Onyx, several of the StarCraft novels and, from what I hear, the Mass Effect tie-ins).

Twilight Company is quite firmly in the second category.

Following the swift destruction of the first Death Star, the book documents the exploits of the 61st Mobile Infantry, nicknamed the eponymous Twilight Company; a team of hardened Rebel soldiers helping the Alliance make a strategic retreat from Yavin to their secret base on Hoth. The team's sergeant and the book's primary POV character, Hazram Namir, travels with recruits both fresh and veteran as Twilight's carrier vessel, the Thunderstrike, ports them between theatres of operation. Namir ends up capturing the deposed governor of an Imperial-controlled world, who reveals a plan of attack that could end up securing victory for the Rebels and throw a permanent spanner into the Empire's works.

This is less a game tie-in novel than it is a novel appropriating the appellation of a game. There's rarely a sense that it's trying to sell you on forking out $99 for the full virtual experience, and instead reads more like its own, self-contained story in the Star Wars universe - and let me tell you, that story is grim.

Twilight Company is what you get if you cross Band of Brothers with Firefly and set it in the Star Wars universe. Namir and the rest of Twilight have witty banter and are sketched out characters on a rickety old ship that is constantly in danger of falling apart, whilst the horrors of an intergalactic war make themselves known through copious casualties and the depressing - and very likely - possibility of defeat. This is as far away from the shiny, pulpy space opera that Star Wars usually is; Twilight Company is an out-and-out war story from the likes of Saving Private Ryan and The Pacific.

That's either going to really turn you off, or make the book more interesting for you. Personally, I loved that Twilight Company departed so ardently from the established tone of the universe. It's not the kind of thing I'd read a lot of, as it's quite draining; if I wanted grimdark war stories with few rays of light at the end, I'd stick to the Warhammer 40,000 universe. But it's different enough that it's appreciable, and is written with such strength and flair that it's hard to dislike the approach, if not the execution.

On that note, this is writer Alexander Freed's first novel; as a debut, it's an assured and confident beginning. Freed writes with a descriptive prose that only skirts the edge of being flowery, relying mostly on curt sentences and verbiage to evoke the short, snappy wartime feel of being on the ground with scant communication. The book predominantly speaks in the same clipped tones the characters do when they're infiltrating an Imperial base on the side of a volcano or surviving the Battle of Hoth, whilst the lighter character moments aboard the Thunderstrike are replete with witty dialogue and an established sense of camaraderie. Between Freed, Chuck Wendig and Claudia Gray, it seems the infusion of new writing blood is exactly what the Star Wars expanded universe needed.

While the grimness is appreciated, it can get a little excessive at times. Characters die at the drop of a hat, and most of it occurs off-screen,a fact compounded by the characters mostly being ones we've only met for a scene or two. Namir reacts to most deaths with detached professionalism, so at least the book isn't asking us to shed tears over the newly-deceased Redshirt #365, but it still feels weird that these deaths are mentioned so casually and off-handedly. I guess that's part of war, though, where death is plentiful and detachment is necessary if you're going to keep on fighting.

That really is what this book is all about: war. While there are bright moments in the dark heat of battle, Twilight Company's strength lies in depicting the hell that is war, and the lack of glamour and glory afforded those who weren't lucky to born with Skywalker, Solo or Organa as a surname. It might not be indicative of the greater, operatic style that Star Wars manifests, but it definitely nails the 'Wars' part of that title. 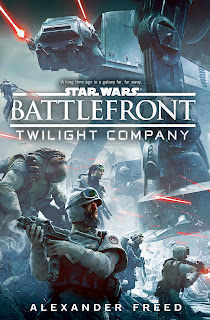 This review is part of our series on Journey to Star Wars: The Force Awakens.
Other reviews from this series include: