Princess Leia may be the most shortchanged of Star Wars' power trio of protagonists. She's not got Luke's emotional character arc, nor is she an intriguing anti-hero like Han. She's unfortunately best remembered from the original trilogy for wearing no bra in the first film and an uncomfortable metal one in the third, while her male counterparts are well known for one-liners, lightsaber fights and shooting first. I'm certainly not saying that fanservice is all that Leia's got as a hallmark, but you have to admit it's not entirely fair that the term is regularly applied to her when certain fans recall her exploits in the original trilogy. She doesn't fare much better in the old Legends books, either; depending on the writer, she's either a forthright - and largely ineffective - political figure, or an action girl add-on who keeps forgetting she has Force powers until she reaches her fifties. Timothy Zahn, Karen Traviss and arguably Troy Denning are the only authors who've previously done her justice as a rounded, multidimensional character who doesn't feel included solely because she was a protagonist in the movies.
Praise be to Claudia Gray, then, for writing what may be the first Star Wars novel in a long time that substantially focuses on Leia while eschewing her previously milquetoast characterisation. Bloodline is, from start to finish, Leia's story; despite the issues that I'm about to raise like Luke's X-Wing from the Dagobah swamp, it's worth awarding Gray strong accolades for giving a key member of Star Wars' trinity the solid solo exploration she's been direly deserving for decades. The ghastly days of The Courtship of Princess Leia, The Crystal Star and the latter-day Legacy of the Force novels are over.

Six years prior to The Force Awakens, there are two camps in the New Republic Senate: the Populists and the Centrists. Representing the former, Leia works to motivate the stagnant Senate into investigating the operations of Rinnrivin Di, a figure of organised crime whose outfit is harassing a fellow Populist world. Rather than wait for the bureaucratic shambles of the Senate to get off their collective rears and do some good, Leia sets off on her own to expose Rinnrivin's machinations and bring him to justice. Trouble is, Rinnrivin's operation might actually be the tip of a very large, very daunting iceberg.

While this might seem like a nice little one-off adventure from the above description, Bloodline's actually slots neatly in as a precursor to much of the status quo in The Force Awakens. Among other things, it offers clues on how Leia and Han became estranged, why the New Republic is seen as a completely ineffectual steward of the galaxy, and possibly how a little thing called the First Order came to be. It might even offer one very big hint on how a certain character defines their allegiance in The Force Awakens, but that'd be spoiling too much.

After the paean I gave to the Shakespearean tour de force of Gray's previous Star Wars tale, Lost Stars, I was looking forward to Bloodline. Gray's established herself as a solid writer to watch, easily one of the new continuity's MVPs alongside the likes of Chuck Wendig and Alexander Freed. She's displayed a knack for easily-established and well-rounded characters, whose dynamics with other players are fascinating to read, and plots that are surprising without being burdened by a plethora of twists. Add to that some pointers on how we get to The Force Awakens, and we appear to have the ingredients of an instant classic.

Going hand-in-hand with all the new stuff is a measured treatment of Leia as a character. Bloodline's greatest strength is in how it draws her as a powerful yet still relatably vulnerable woman, who balances multiple roles as a protagonist. There are frequent scenes of emotive, strident drive on Leia's part in the halls of Senate, evoking the take-no-guff figure of A New Hope, which are then tempered by her intimate radio chats with Han and her internal ruminations on how her son Ben is progressing at Luke's Jedi academy. Throughout the story Leia is evenly presented as a mother, a politician, an action hero and a leader whilst still being a grounded, human character. A lot that Gray does with Leia transcends the fairly two-dimensional representation which many authors favoured back in Legends, where she was mostly assigned a single role in the story - usually a politician lacking significant affect - and spent a lot of time post-Hand of Thrawn solely fretting over her kids (which was fair in some cases, considering her son Anakin was killed and her other son Jacen became a Sith Lord - Leia really doesn't have luck with children in any continuity, huh?).

As much as I enjoyed Gray's illuminating take on Leia, and relished the fact that we have a story that actually makes Star Wars politics interesting, I wasn't quite as sold here as I was on Lost Stars. For all that it does to innovate in the faster-paced new Star Wars EU, it felt oddly slow at points; granted, it's a political thriller rather than the adventure-rescue of Aftermath or the war story of Twilight Company, so it's not to be expected that there'll be copious speeder chases or space battles (though there are a few regardless). Leia does get occasion to kick ass, and it's wonderful to see her doing so sans Luke and Han; there's even a fantastic scene where one of her most memorable instances from Return of the Jedi is recontextualised from pure fanservice and into a potent moment of self-empowerment which manages to put the fear of God into a slimy gangster.

But even with all of the above, Bloodline establishes itself as a much more narratively sedate experience than recent Star Wars books. The political mess that is the apathetic and lethargic Senate takes up more time and focus than the actual antagonists of the piece, as Leia works with her staff and a crossbench Centrist Senator to get to the heart of the corruption and expose the darkness at the core of the galaxy's administration. We also spend far too many moments with Lady Carise Sindian, an annoying, foppish Centrist aristocrat whose obnoxious introspection takes up far too much time before the narrative meat of her story starts to come to the surface.

In-between dicey-but-sluggish politics and the occasional clandestine operation in the quest to take down Rinnrivin, Gray also writes some lovely character moments that show off her talent for pairing people with interesting dynamics and letting the resulting scenes spark conflict. A few new characters, including an ace pilot (no, not Poe) and Leia's personal assistant, are welcome additions who play nicely off each other. Ransolm Casterfo, Leia's erstwhile Centrist ally, is also one of Bloodline's highlights, whose deuteragonist duties entail fiercely opposing Leia's political ideology whilst being in and of himself a likeable, nuanced character.

But on that note, Bloodline's political commentary is not subtle. The Galactic Senate may as well be the US Congress, where the Populists are progressive, insightful leaders and the Centrists are scum-sucking, corrupt conservatives who'd much rather focus on money and resources than people. Casterfo is presented as the lone voice of reason in the latter, attempting to do a decent job of legitimising right-wing policies, but the Centrists would probably save time by just renaming themselves the Lehublican Party. Though I tend to lean left myself, there's only so much anti-right-wing proselytising one can take in a series ostensibly about space wizards and laser guns.

At the end of it all, Bloodline succeeds chiefly by focusing on Leia as a character rather than a plot device. Her arc is the smoothest and most enjoyable of the book, and Gray writes her with confident and assured introspective prose. Bloodline is the Leia-centric book I've been waiting years for, and is a welcome addition to the canvas of Star Wars' new Expanded Universe. 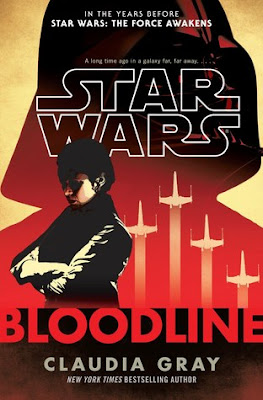 This review is part of our series on Journey to Star Wars: The Force Awakens.
Other reviews from this series include:
Star Wars: Aftermath
Star Wars: Lost Stars
Star Wars Battlefront: Twilight Company