Mistborn: The Bands of Mourning - Review

- February 10, 2016
It's getting to the point where I almost can't write reviews about Brandon Sanderson's work anymore. Even the slightly riskier of his recent narrative ventures - like the experimental Legion: Skin Deep - end up paying rich dividends, to say nothing of his thoroughly entertaining doorstopper material in The Stormlight Archive. There's only so many ways a reviewer can praise an author's work before it almost becomes a find-and-replace with the newer book's title on the old review.

Like with last year's Shadows of Self, we've been spoiled with yet another exciting, layered, thought-provoking and just plain fun entry in the Mistborn series. The Bands of Mourning picks up six months after Shadows, with Wax still reeling from the last book's devastating emotional gut punch. He's yanked from his attempted convalescence by the kandra, who've discovered the possible whereabouts of the most powerful weapon in Mistborn history - the titular Bands of Mourning. A leftover from the Lord Ruler's reign in the original Mistborn trilogy, the Bands have the power to give every single Allomancy power to whomever puts them on. It seems Mr Suit, criminal mastermind and Wax's erstwhile uncle, is after the Bands too; since it would be a very bad thing if Suit got hold of these Weapons of Metallic Destruction, Wax and co. set off to stop him.

Were I to search for criticism in what is otherwise a truly excellent narrative sojourn, I'd say that the latter-day Mistborn books are getting slightly formulaic. Not in the manner of, say, The Dresden Files or a few of the Discworld novels, but it's becoming a little more noticeable. Both of the previous Mistborn western novels, The Alloy of Law and Shadows of Self, begin with an initial call to adventure, follow a standard three-act structure, have surprising reveals at key points of the book, and end with one big and a few small sequel hooks. The Bands of Mourning is no exception to that structure, following the template of its predecessors to a tee.

The enjoyment of the story stems less from following similar beats to the first two books, and more from the reveals and character pairings that Sanderson messes around with. Bands' big strength is in the exploration of its female protagonists; sisters Steris and Marasi get the bulk of the fleshing out this time around, with Steris in particular proving to have some remarkable hidden depths. Another point in Bands' favour is just how funny it is, with a lot of comedy gold coming from interesting character pairings like wannabe-buddy-cops Wayne and Marasi.

Where Shadows was more of a CSI meets Clint Eastwood western, Bands seems to combine the politics of the Star Wars prequels with the action-adventure of Indiana Jones. Wax and his buddies leave the city of Elendel early on, allowing Sanderson to flex his worldbuilding muscles by taking us to the waterfall city of New Seran and the harsh, cold climes of the southern reaches. There's much more of a swashbuckling tone to the story compared to the brewing civil war/inner turmoil of Shadows, which contributes to the fun factor.

That, really, is the word that once again sums up The Bands of Mourning as a whole: fun. It's just a really nice, thrilling jaunt across the world of Scadrial, with some great character development and one hell of a sequel hook on the very last page (long-term Mistborn readers will probably, as I did, start shouting, screaming and bemoaning the wait for the follow-up book, The Lost Metal).

I'm really going to need to find a new rubric to grade Sanderson's books by now, since they're just that damn good. Maybe I need a separate review section that ranks him out of 10 Sandersons? In that case, consider The Band of Mourning an 8/10 Sandersons; as good as Shadows of Self, not quite as good as The Alloy of Law. But in terms of its comparison to other books of the genre, Bands stands, as most Sanderson work does, head and shoulders above the competition. 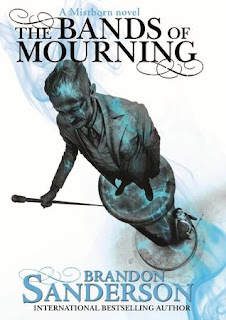 The Bands of Mourning is available in bookstores now.