Chris' top 10 things you should Read/Watch/Play from 2015

In no particular order:

A marvel of video game design that marries an engrossing story to some truly excellent gameplay. Geralt's final chapter works well as a standalone and a capstone, and is definitely worthy of play. 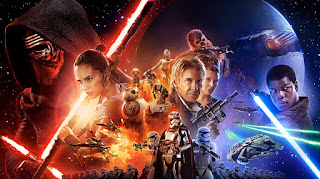 Let us all rejoice that Abrams gave us a retro, swashbuckling tale of heart and humour in a galaxy far, far away.

Who'd've thought a video game tie-in novel could be so good? Far eclipsing the game it advertises, Twilight Company is a tense, nail-biting war story that showcases a different side of the Star Wars universe. As both a Star Wars novel and a game tie-in, it's utterly unique and a stellar first effort from writer Alexander Freed.

Alternate history tales where the Nazis won Word War II have been done fairly often, but rarely in such a stylish and heartwrenching way. Ryan Grauman's cross-country revenge story is as tense as it is rich with character.

What really is there left to say about Saga at this point? It's still excellent. It will probably always be excellent. Even a bridging volume like this one, connecting one story arc to the next, is excellent. It's just all excellent.

Yes, the story is muddled. Yes, its multiplayer is rubbish. Yes, it's sad that this is both the best and, most likely, last real Metal Gear Solid game. But even with a lacking narrative, bloody hell did The Phantom Pain deliver on the gameplay side.

Fulton Devices for everyone!

...hm? Sorry, I was busy tweaking my Power Armour, feeding Dogmeat and repelling Super Mutants from the heavily-fortified town I've made.

It does some things I don't like that mess up how excellent the first films were, but I have to respect Rebellion for being gutsy enough to make such weird choices and stick to them. It's also gorgeously illustrated and as marvelously engaging as its predecessor.

The hair. The setting. The characters. The theme song.

Like a chocolate bar or a really nice beer, Space Dandy looks good, tastes great going down, and leaves you satisfied. You can also have as little or as much as you like, and it won't give you weight gain! (unlike chocolate or beer)

Mistborn: Shadows of Self

Brandon Sanderson long ago proved he's capable of pretty much anything when it comes to fantasy novels. A city full of immortals with torrid politics? A gang of youths fighting superheroes with homemade weapons and power gloves? A Wild West-era town besieged by magicians who ingest metal to gain magic powers? Yeah. We love them all.

The latter setting makes Shadows of Self another great entry in the Mistborn canon, as well as a fantastic story in its own right. Also, I want to go drinking with Wayne.

A Knight of the Seven Kingdoms


SOME THINGS TO AVOID

While I love The Dresden Files, Jim Butcher's new steampunk opus just wasn't for me. Purple prose, half-sketched characters and good lord too many damn cats.

Were I doing a "worst books of 2015" dedicated list, this'd sit proudly at the top. A messy, over-explanatory and thoroughly uninteresting collection of paper that could've been used to write a much more engaging story. Save the swashbuckling for other tales.

Gregory Maguire is clever, no doubt, and Wicked was pretty good. Despite that, After Alice feels like it's clever for the sake of being clever. It's also half a good book; Ada's adventures were interesting, while the above-ground stuff was not.

While it might be fun for all of 5 minutes, don't splash the cash on this one. Maybe borrow it from a friend. Or play something else. Whatever works.


STUFF I HAVEN'T CHECKED OUT YET

Looking forward to more excellent things next year! Have a safe and Merry Christmas, and I'll see you in reviews in 2016!